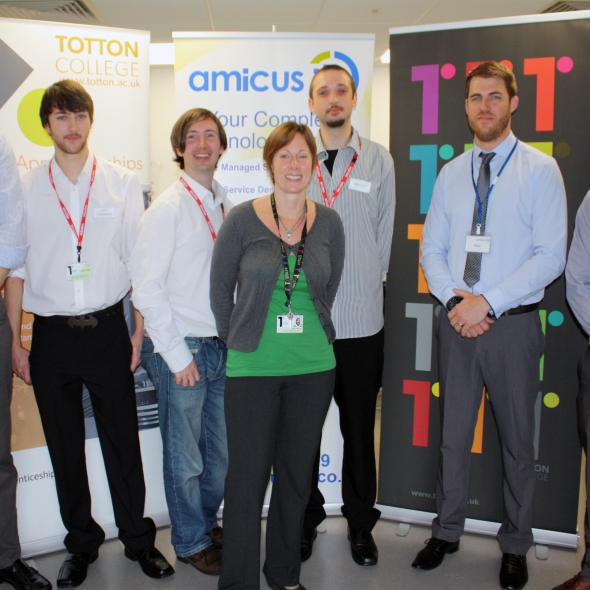 Southampton based IT and Managed Services Provider, Amicus ITS, is stepping up its drive to recruit new talent by encouraging students to take on an apprenticeship in the much sought-after technology sector.

In partnership with Totton College, Amicus ITS will provide five apprentices with a comprehensive on-the-job-training programme across a variety of core disciplines combined with college study from this coming September.

The five students will be given the opportunity to join the Company on an 18-month programme that will see them end up with four internationally-recognised IT qualifications.

Business Development Advisor at Totton College, Elaine Gibson, said: “We recently held an Apprentice Assessment Day at the college for five new potential candidates. Our apprenticeship schemes are rising in popularity and are definitely a path that many more young people are taking to help them get into work, whilst learning at the same time. As well as a variety of activities organised to help assess the candidates, Service Desk Manager Max Kennard provided an overview of the Apprenticeship Scheme and Simon Coish, a current apprentice at Amicus ITS, gave a talk about his experiences on the programme, which candidates found incredibly useful. We are looking forward to working closely with Amicus ITS to provide training programmes alongside the apprentices when they are appointed.”

Amicus ITS, Managing Director, Steve Jackson said: “Amicus ITS is a strong advocate of apprenticeships and vocational learning and we know from experience that there’s a wealth of young talent out there that is eager to enter the industry. The great thing about our apprenticeship scheme is that it is open to everyone, regardless of experience in the IT sector.

“In partnership with Totton College, our apprenticeship programme will ensure that people gain the skills necessary through one-to-one buddying and mentoring, classroom training and self-study to become fully qualified IT practitioners.”

Last year Amicus ITS received more than 150 applications for its apprenticeship programme, of which five were offered places on the scheme. Four are still continuing on the scheme and progressing well, as anticipated.

Simon Coish has recently been appointed to the Amicus ITS Service Desk having completed the Amicus apprenticeship programme. Simon said: “The last nine months have been really hard work but extremely rewarding. I have learned a huge amount on the job from the team around me and am studying towards my remaining qualifications.

“The apprenticeship programme has proved a huge stepping stone for me to develop a career in one of the world’s fastest growing industries.”

Established in Southampton for over 25 years, Amicus ITS has been voted as the No1 IT Managed Service Provider in the UK, Europe, EMEA in 2014 and is ranked 13th in the world. Steve Jackson continued: “We are recognised globally as one of the world’s leading IT and MSP companies. This is an attractive proposition for people entering the industry looking for first class training and career development as well as the chance to work with some of the world’s biggest brands.”

From its HQ in Totton Amicus ITS provides around the clock IT support to organisations that rely on technology to meet their business needs including financial giants Ageas, Axa Wealth and Swedish car manufacturer Volvo.  It also supports 22% of the UK’s NHS out of hour’s patient clinical care through life critical IT infrastructure support.

For more information or to apply for the Amicus ITS apprenticeship programme please visit www.amicusits.co.uk or contact Lindsay Burden on 07734 720020.