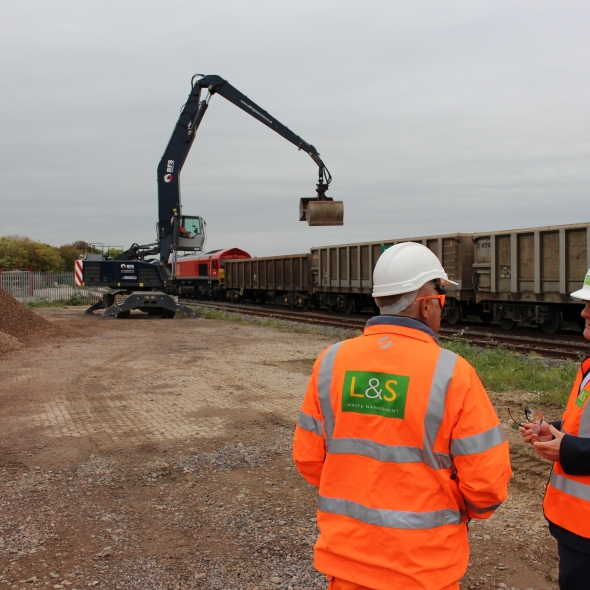 Following the recent opening of its aggregate rail depot in Southampton, L&S Waste Management has welcomed Member of Parliament for Southampton Itchen, Royston Smith, to the site for a tour of the facility.

The L&S aggregate terminal is currently the only rail facility serving the city of Southampton, as L&S Waste Management Managing Director, Mick Balch explains: “Previously, freight operators were required to undertake at least a 20 mile return journey to collect construction material for use in and around the City.

“With such huge demand for aggregate and recycled material to support theconstruction industry in the area, there was a clear need for this type of facility.

“With the average aggregates train carrying the same capacity as 120 HGV’s we anticipate that brining aggregate into the heart of the city by rail will reduce HGV movements in and around Southampton by around 5,000 each year.”

As one of only six designated Clean Air Zones across the UK, Southampton is leading the way in its innovative approach to environmentally friendly transport and freight solutions in and out of the City.

Royston Smith MP said: “Utilising the rail network to bring aggregate into the city is a no brainer. It is a great example of how we can reduce the levels of air pollution without the need for charging business and the public to drive into the centre of the city. Indeed, using rail freight in this way could solve the air quality problems that Southampton faces in one fell swoop.”

The new L&S aggregate rail terminal is a great asset for the city of Southampton and for the industry’s that it supports.”