11 February 2018 by Matt Trace in Construction/Architectural 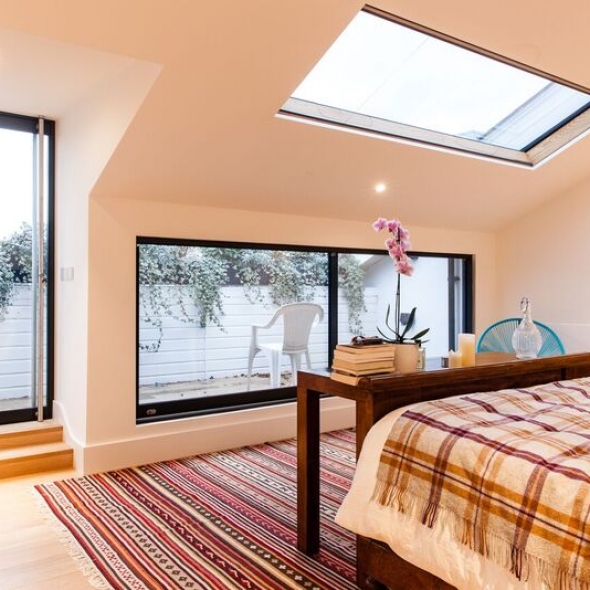 Stella Rooflights has supplied five stunning bespoke rooflights for an exciting conversion in South West London. The project is unique in that the apartment spans the entire top floor of it’s mid-victorian building in Putney.

7 cavalry gardens was a self-contained flat occupying the whole of the second floor of four storey mid Victorian building, which was converted in the late 1980s from a large house or possibly two houses, into flats with a large extension to the east side. The roof was rebuilt with flat roof mansard structures, various dormers and old velux style rooflights.

Although not subject to a statutory listing the property does fall within the East Putney Conservation Area and is sited on a prominent section road. The low budget rooflights, which sat proud of the roof plane drew the eye unnecessarily to the unsightly mansard roof. The lack of coherence within the flat due to the multiplicity of the rooflights and their scale provided an under lit and confused hierarchy to the rooms.

By reducing the number of rooflights and using a cleaner design with minimal frames set within the plane of the slate roof the client, Zachary Pulman Design Studio, was able to both reduce their visual impact externally while dramatically improving the order and special quality within the flat.

Zach Pulman commissioned five stunning bespoke rooflights from Stella, who were able to adapt their product to a design which met his exacting requirements, in terms of sizes, appearance and operation, including concealed electric actuation and electric blinds. Stella's truly bespoke rooflight offering enabled the client to tailor the product in order to make his vision a reality.

The ambitious project has completely re-imagine the internal layout and external aesthetics of the property. This has included an impressive minimalist floor to ceiling glass doors leading to the terraces and the creation of additional accommodation (a bedroom and shower room) in what is now a stylish, light filled, yet quietly understated Penthouse Apartment.

Whilst refreshingly contemporary, the new design remains sympathetic to the building and its surroundings and compliant with all aspects of the local planning authorities.

The thoughtful use of high quality materials and bespoke finishes were an integral aspect of the project throughout. This was particularly true of the rooflights, which have proved a major feature of the refurbishment and now flood the new space with light

In line with current national and local government policy on energy conservation, the overall energy consumption has been reduced both in terms of passive measures and the equipment used. The new rooflights have significantly contributed the high levels of insulation due to their quality construction and gas filled Pilkington glazing units.

The project has been a resounding success and with the help of Stella bespoke rooflights, Zach Pulman has transformed what was a modest traditional apartment into a luxurious modernist home.