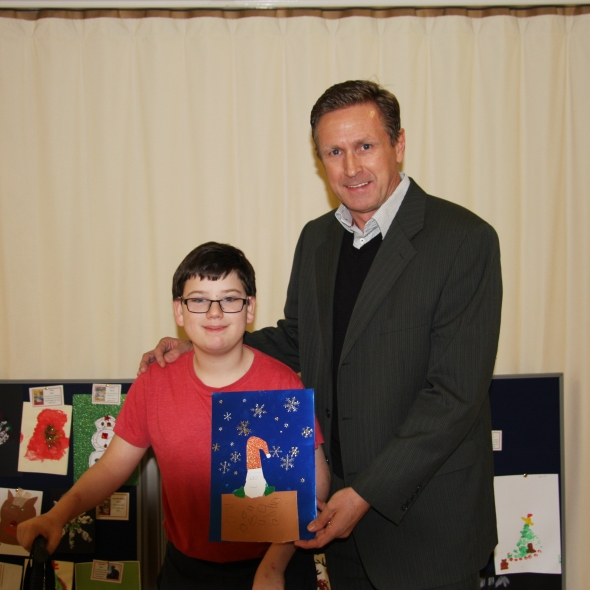 This Christmas hundreds of people across the South will receive a card designed by 10 year-old Blair Martin who won this year’s L&S Waste Management Christmas card design competition.

The competition, now in its fourth year, sees children with motor disorders who attend The Rainbow Centre in Fareham put forward their best Christmas drawings, with the winner’s design appearing on L&S’ electronic Christmas cards.

Cards are also sold by the Rainbow Centre to help raise money for their tireless work in supporting young children and their families across the region.

Blair’s design was announced the winner by L&S Waste managing director Mick Balch at a special function at the Rainbow Centre.

Mick and his team handed out presents to all the children at the Centre and presented the winner with an extra special prize. As an avid Portsmouth FC fan, Blair was delighted to receive four VIP tickets to the first home game of 2015, including a tour of Fratton Park, the chance to meet the players, and a pre-match hospitality meal, before enjoying executive seats to watch his home team play.

Balch said: “It’s a real pleasure for us to be working so closely with such a wonderful local charity and it’s great to get the children involved in such a fun project.

“On behalf of everyone at L&S, I’d like to say a big thank you to all the children that took part, it was very difficult to choose a winner as the standard was so high, but well done to Blair for his brilliant design.”

L&S has opted to send their annual Christmas cards as an eco-friendly e-card this year, so will further donate the costs of production and postage that traditional cards would normally incur to the charity.

As an extra special Christmas gift, L&S also presented the Rainbow Centre with a cheque for £3,000, a donation collected as a percentage of its online skip sales throughout 2014.

Nikki Radcliff, fundraising manager at The Rainbow Centre, said: “We are so grateful to L&S Waste for their continued support over the years, especially with the generous donations from their online sales. The children loved designing the Christmas cards and Blair is absolutely thrilled with his upcoming Portsmouth FC trip.”