12 December 2014 by Lucie Chilton in General 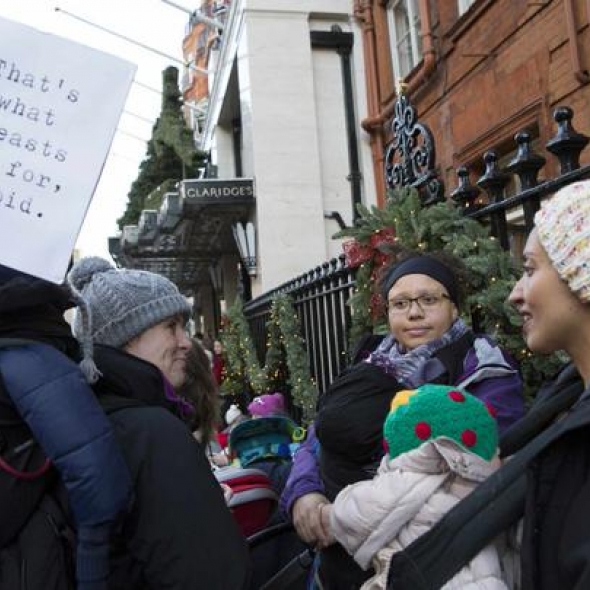 Today, if you were to do a quick search for Claridges you would see a never-ending scroll of criticism towards the once reputable hotel. Pictures of the grand foyer or iconic entrance have been replaced with photographs of breast-feeding women!

So where did it all go tits up? (Excuse the pun) As you may know, a humiliated mother was requested to cover up whilst breastfeeding her 12 week old baby at the luxury hotel. Speaking out on Twitter, Louise Burns posted photos of her with and without the cover up, with one picture soon generating 1,300 retweets.

Breastfeeding in public has always been a vehemently -debated subject, and regardless of your opinion on the matter, this is a sensitive issue and must be dealt with sensitively by companies and the people that represent them.

It appears that Claridges has now caused more offence in its response, than the act of breastfeeding itself causes to some.

It’s true what they say ‘hell hath no fury like a woman scorn’ and in today’s world of instant social sharing, that fury is quickly vented far and wide among journalist’s Twitter feeds.

To add insult to injury, the country’s most controversial politician decided to wade in on the argument; making matters worse for the hotel by suggesting breastfeeding women should sit in a corner or in the toilets (an extremely unhygienic suggestion) to avoid offending people.

Nearly two weeks on and reporters don’t seem to be letting this one go just yet. Not that the press are ever short of reasons to give Mr Farage a hard time, but with women breastfeeding their babies in protest outside the hotel, the media have a field day with this one.

Claridges are remaining silent, in the hope that this all blows over soon. In fact their last Twitter activity (on the 2nd December) was an apology to Burns and a general statement for pro breastfeeding. Whilst we wait to see how they handle their PR in the wake of the crisis, we would anticipate a wider more public apology and perhaps some kind of charitable donation to breast cancer…watch this space!

The question is would Claridges be experiencing one of their worst ever PR disasters if it wasn’t for that initial Tweet? It’s difficult to say for sure, but what is clear is the speed of which the story snowballed and the spiralling publicity it generated.

Just another example of the power of social media